A typical sump pump, when installed correctly in an appropriate application, can usually be expected to have a lifespan of anywhere between 7 – 10 years depending on the application. However, every once in a while, you might run across an exception to the norm.

When John Bachand and his team at JP Bachand Contracting in Newington, CT replaced an old pump for one of their clients, they unearthed one of Zoeller’s older models that isn’t even manufactured anymore! This old pump is Zoeller’s model 54, which was only manufactured through the early 1980’s.

The homeowner informed John’s team that he had not changed the pump since he moved into the house back in 1976. The man also believed it to be the original pump installed in the home 10 years prior, in 1966. With the knowledge that this pump could very well be over 50 years old, John contacted Zoeller to try and verify the date of manufacture. When the photos were reviewed by the Zoeller team, they determined that the pump was just 3 years shy of 50; 47, actually, and the motor was still running! After retiring this small but sturdy sump pump, its place was taken by a Zoeller Pump Company model 53®, which is, John informed the team, “the only pump we’ve used in 35 years in business.” 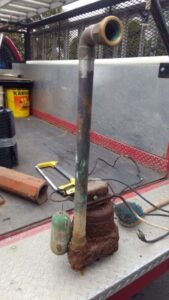